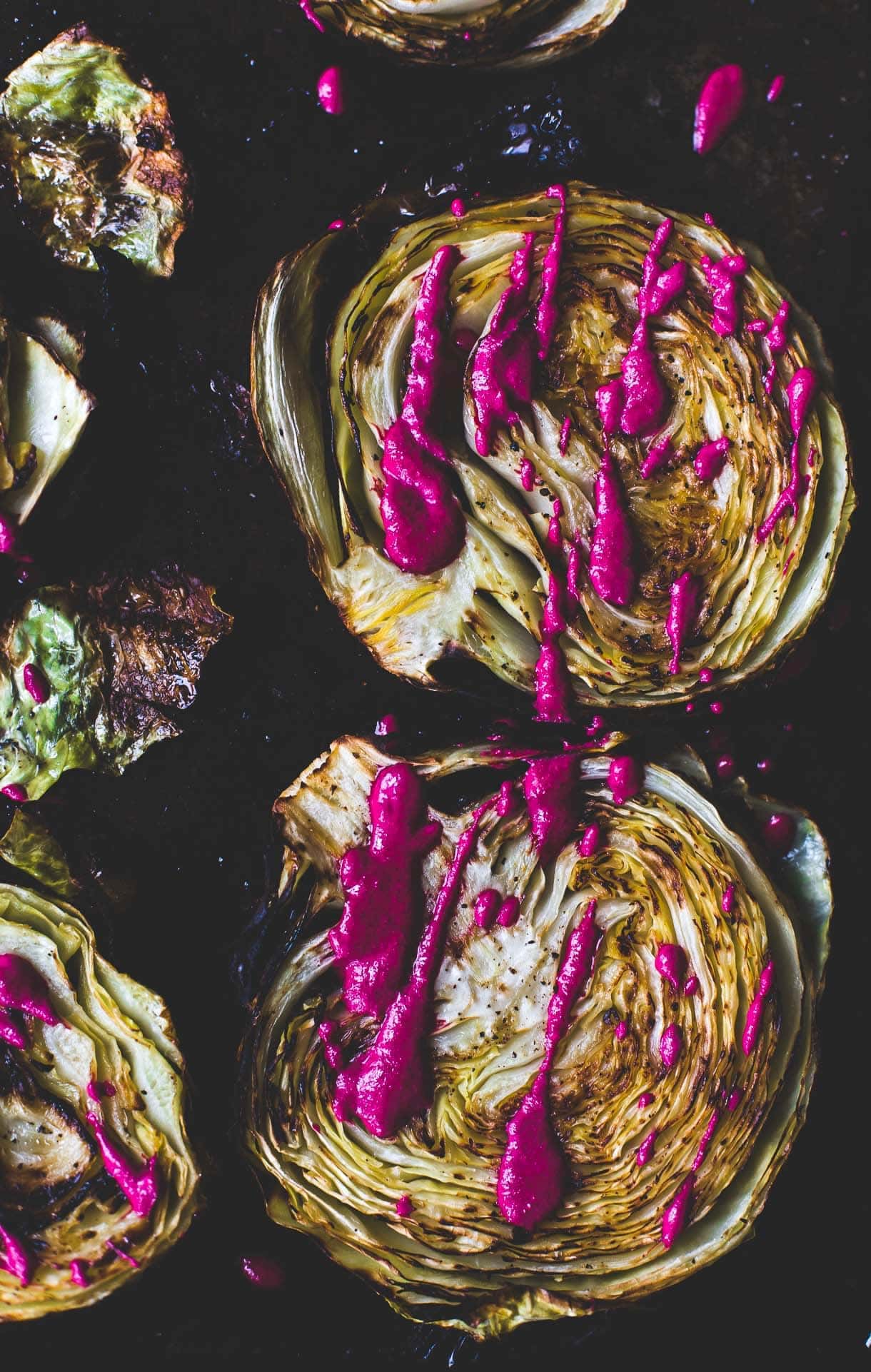 About these Roasted Cabbage Steaks:

Cauliflower rocked my world when Bon Appetit showed me how to make it like a “steak” a few years ago. Charred edges, tender inside, sturdy enough for a knife, and as satisfying as meat. And now cabbage too.

Commonly used for slaw, soup, rolls, and sauerkraut, I hadn’t thought of cabbage as a good “roaster”. In an effort to save a head that was dwindling in the back of the refrigerator, I turned to my m.o. – olive oil, salt, and a hot oven. I cut it into 1/2 inch thick steaks like I’d done with cauliflower, and listened to the sizzles as it transformed into something softly sweet, salty, and blackened on the edges. Qualities I particularly love, and a total surprise. Cabbage had never tasted so good. 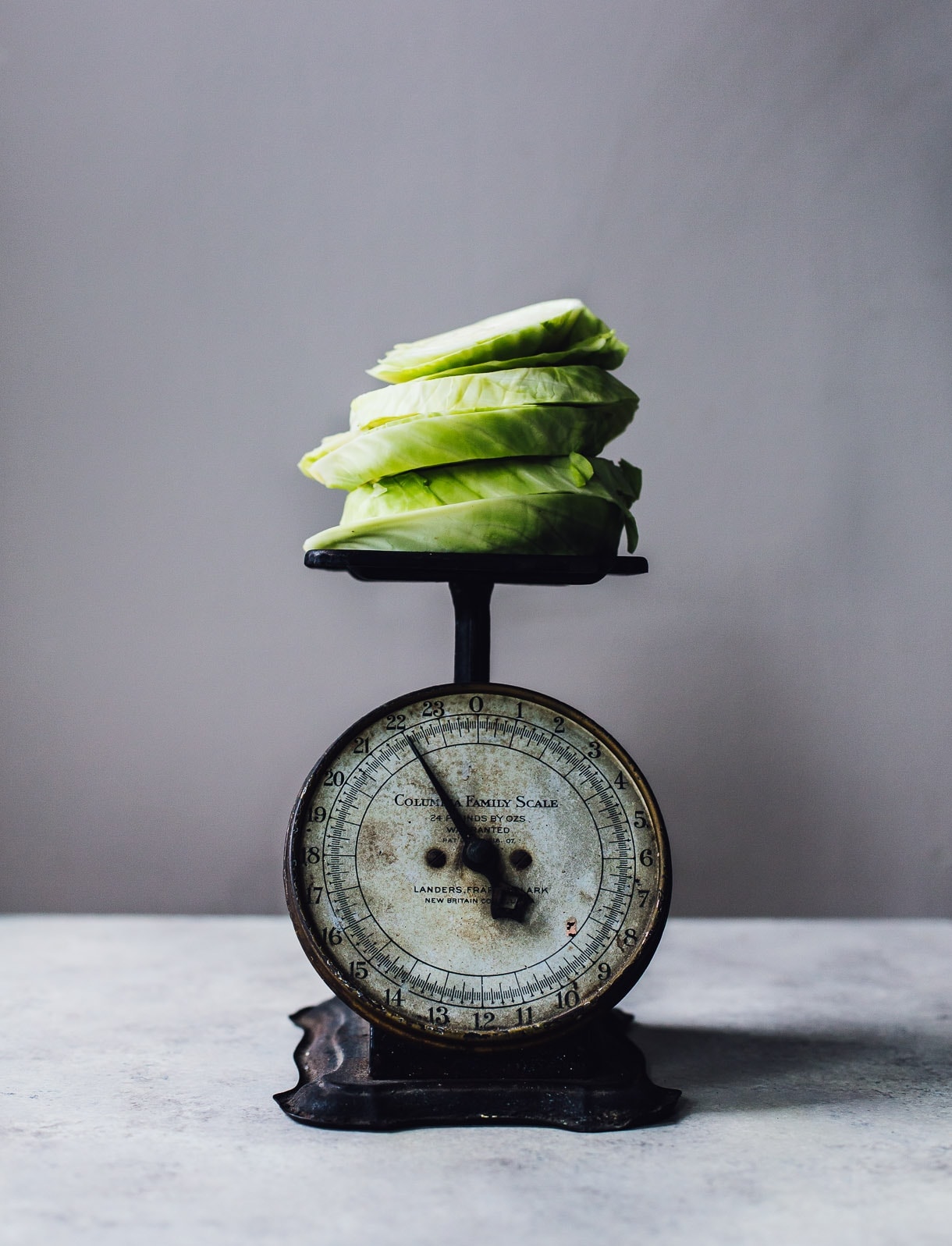 I make roasted cabbage steaks quite often now, and I like to dress them up with sauce if I have time. I’ve been rotating between spicy peanut, and now this creamy, garlicky, beet sauce. The color, oh that color! Heavy on the garlic and lemon juice, crème fraiche, olive oil and finely grated beets. Almost like aioli, but no egg involved. It even has an extra beet + vitamin boost from Megafood {a long-term partner} Daily Energy Powder, which is tasteless.

I like adding it to savory things instead of always making a smoothie. In addition to B12, and fresh beet root (!) Daily Energy also contains Eleuthero, Ashwagandha, and Bacopa– herbs revered through history for supporting your body’s ability to perform and manage through times of stress.* 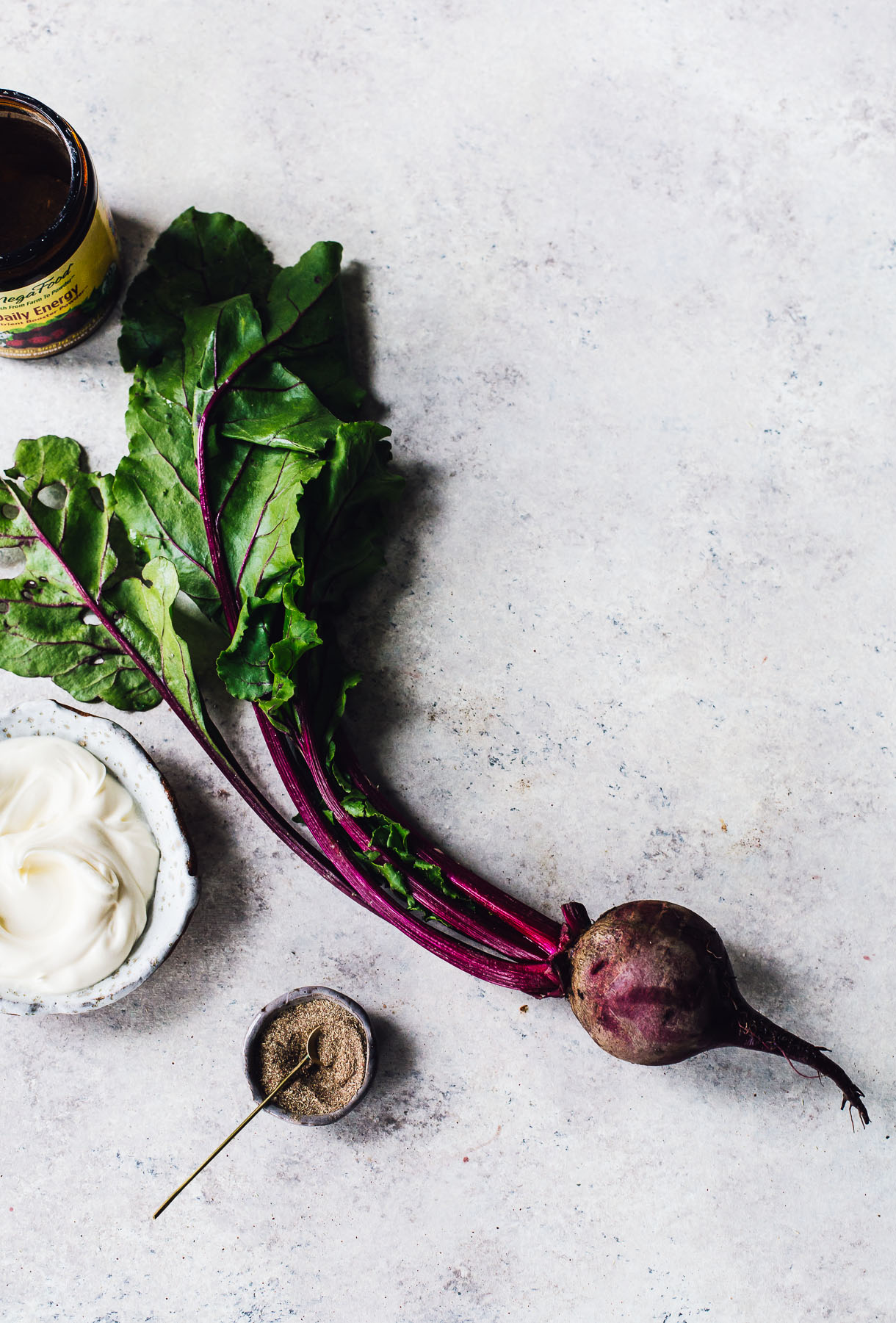 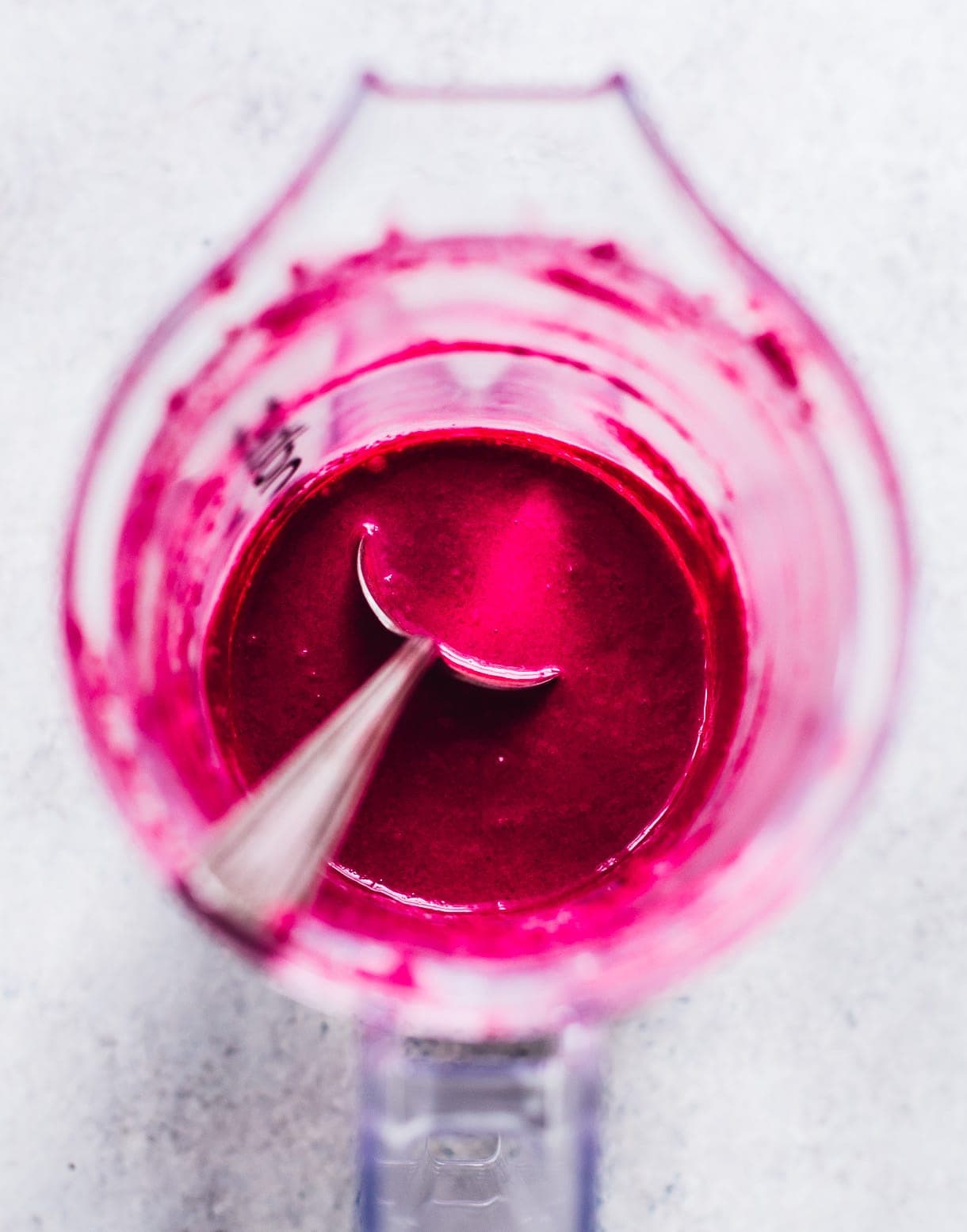 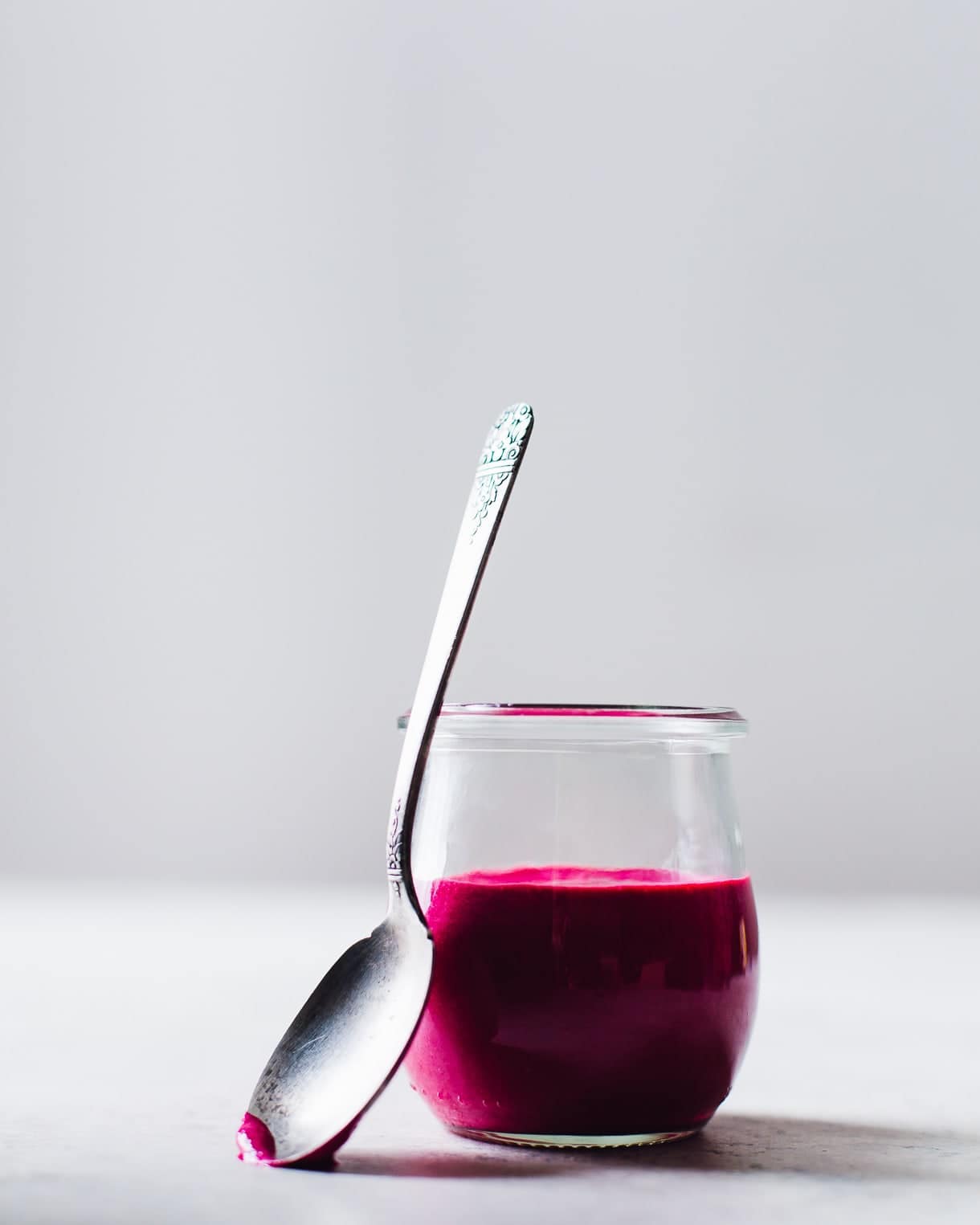 Side note: A head of cabbage will make about 5 steaks, so I’ve been reheating the leftovers in a cast-iron skillet, and topping with an egg in the morning. A really easy, not-so-boring breakfast.

Also, through my continued partnership with MegaFood, I just took their pledge, as a way of saying I’m committed to filling my own nutritional gaps, and sharing that experience with you. Anyone can take the pledge, and in doing so, MegaFood will donate 1 bottle of MegaFood Multivitamins to someone in need. You’ll also get a $5 coupon, and a chance to win an amazing getaway. 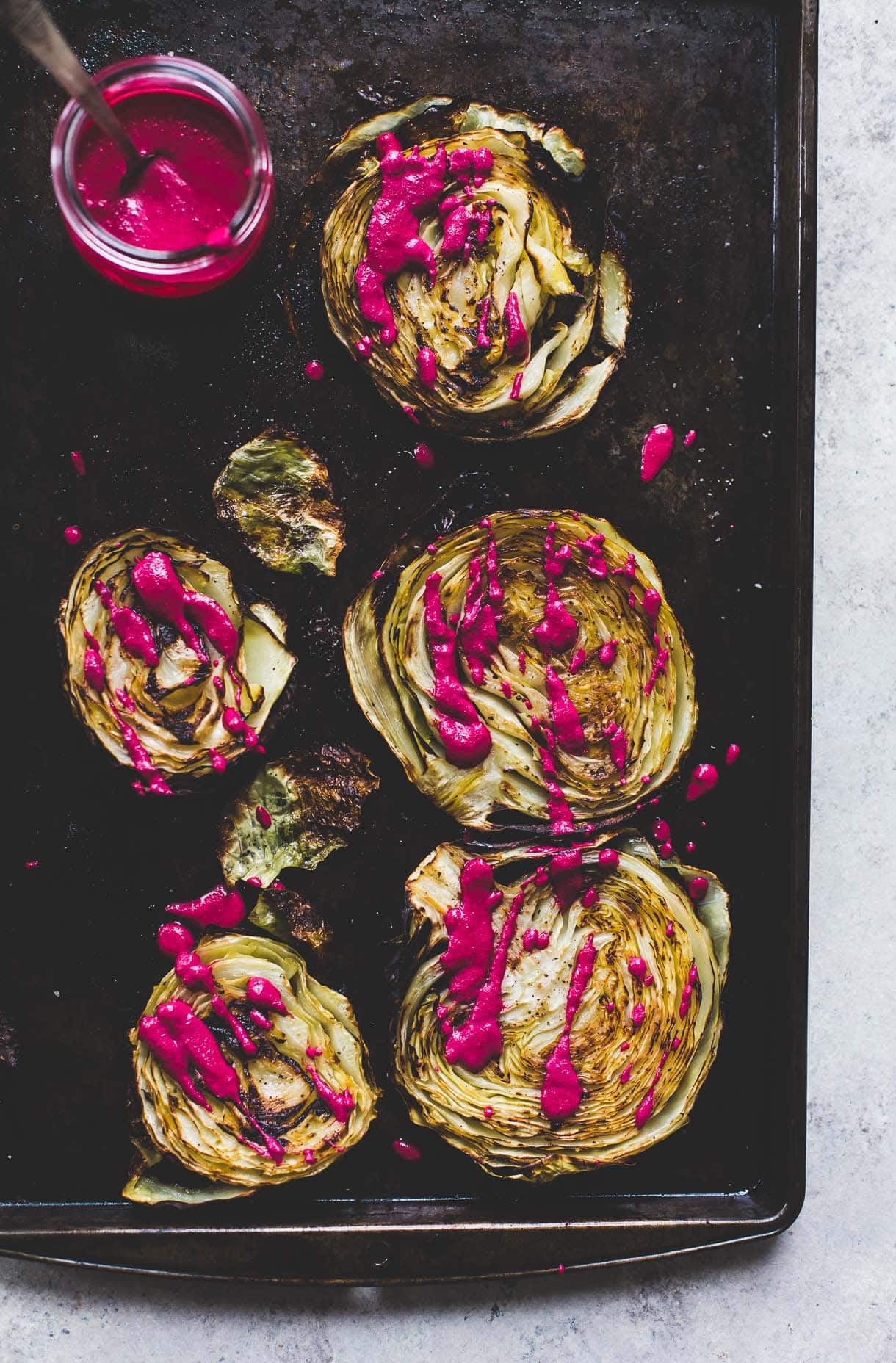 About being A Former Protector of Feelings:

I used to be that person who was always on the fence when it came to committing. Whether that be going to the New Year’s party, scheduling a happy hour, planning a girls night, you name it. The times when I really didn’t feel like doing or going, I knew it right away, for whatever reasons those might have been. But I didn’t want to disappoint those who had been kind enough to ask.

Instead I’d tell them I was “pretty sure it would work”, or “let me check my schedule.”

Procrastinating day-by-day, hour-by-hour, until it was so late in the game, it was rude. A flake. To the tune of people writing me off.

But if I told them the truth right away, I’d hurt their feelings. As a people pleaser, that was my ultimate fear. People disliking me because I chose me first, instead of their needs.

I lost a lot of friends. I cried. My actions were so much different than what my heart was trying to accomplish. A protector of feelings.

When I started dating Brian, seven years ago, he saw this pattern right away. The conversation we had was a wake up call, to something I knew I was doing, but didn’t know how to stop. I dug deep with a therapist, peeling away the layers. As many of the other eclectic attributes I have today, this too was rooted in my childhood. The effects of growing up in a family where it was more frowned upon to hurt someone’s feeling and appear disrespectful, than to be upfront, and sometimes bold.

I was on the other side of this kind of situation recently, and I found myself really wishing the person would have just been upfront, because I ended up feeling mislead and deceived. Which is why I wanted to talk about it today. Because maybe you’re that person, like I have been, and don’t like the behavior you’re doing, but don’t know how to stop. It’s really not about “learning to say no,” as a lot of people will preach. I believe it’s more about being honest with yourself, and others, and understanding that the way they receive your response is up to them, and something you can’t control. More often than not, they will respect whatever your answer is. This behavior takes practice, challenging yourself, and feeling uncomfortable. But then feeling so free and honest that you’ll wonder why you didn’t start doing it sooner. And it gets easier, I’m sure of it. 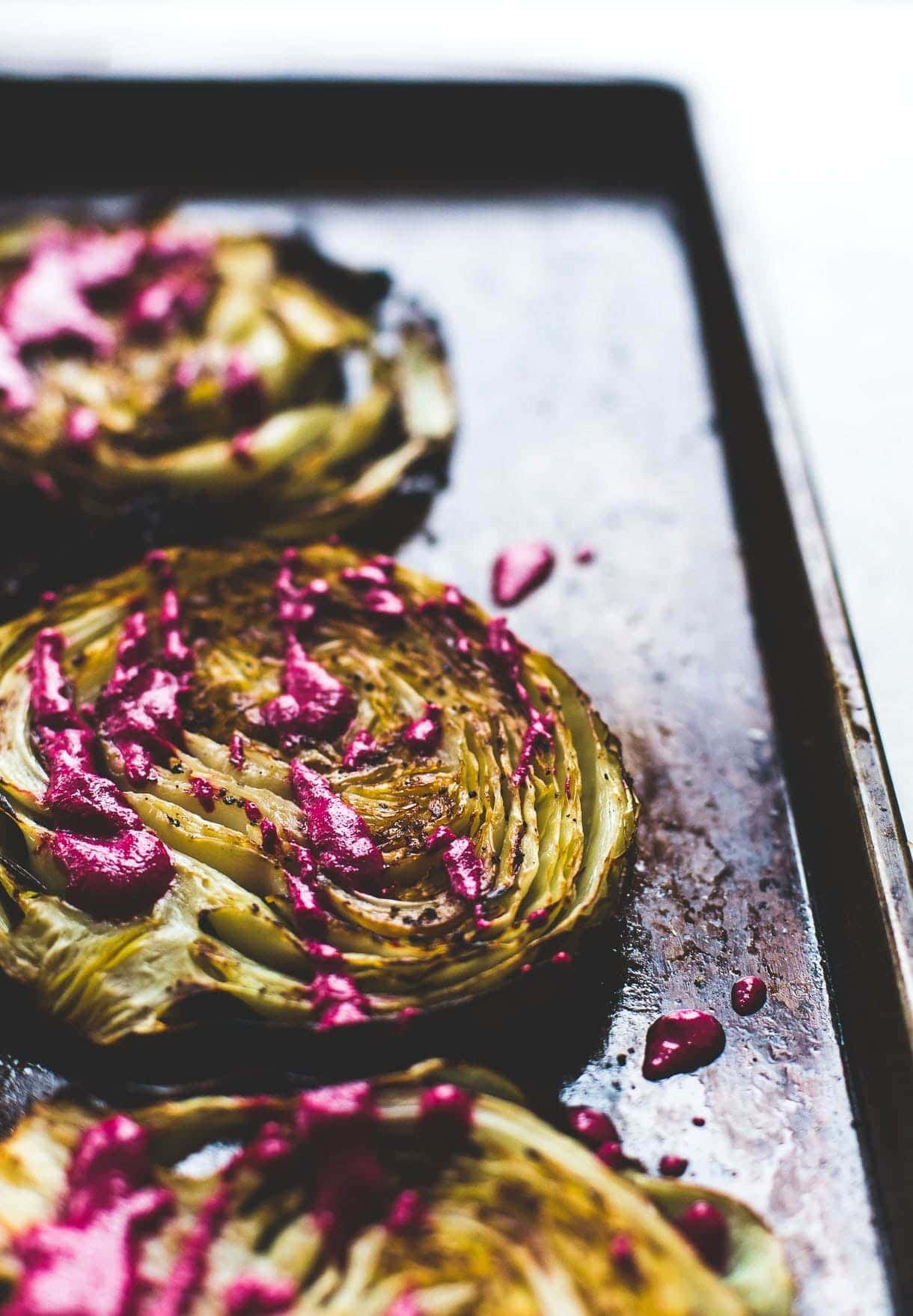 It works best to process the sauce in a small blender container or small food processor. Otherwise there is not enough ingredients to make it blend well to become smooth.


*This blog is supported through the use of Amazon links, which I may make a small commission from should you decide to purchase.
View the Post
Grilled Asian Cabbage Salad with Chicken
View the Post
Vibrant Vegan Hummus Recipe with Seedy Oat Crunch
View the Post
How to Make Sourdough Focaccia: a Step-by-Step Tutorial