Finger foods, tiny foods, appetizers, small bites….whatever you like to call them, they’re great to nibble on. They can jazz up a party spread and give you the green light to get a little taste of everything. How genius was it of  Teri Lyn Fischer and Jenny Park of the fantastic blog Spoon Fork Bacon to create an entire cookbook based on tiny foods? Grab your girlfriends, some wine, and have a party making some of these delectable minis!

This cookbook is all sorts of fun. With four chapters broken into a snack party, dinner party, dessert party, and cocktail party, you’ll be totally set for your next big get-together. When I saw the Sweet Potato Latkes, my mouth started to water thinking of their crunchy, crispy exterior dipped in a tangy yogurt sauce…..

Although most of the recipes in this cookbook are not gluten free, I think many of them would be relatively easy to convert, such as this one. Instead of all purpose flour I used a mixture of sorghum flour and tapioca starch and had perfect results. Which brings me to a point I’d like to bring up – don’t shy away from amazing cookbooks just because they aren’t gluten free dedicated! There are many ways to adjust the recipes to fit your eating habits, it may just take a little creativity and experimenting! 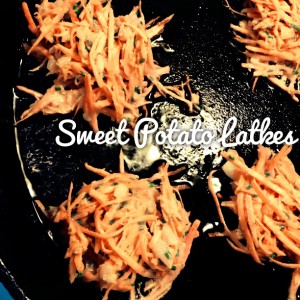 This recipe comes together very quickly with a few simple ingredients and a little elbow grease to shred the sweet potato. Perhaps the most important step in making any type of latke or fritter is to get as much moisture out of the starch so that it gets nice and crispy. I put the shreds into the middle of a kitchen towel, rolled it up, and twisted the two ends of the towel as hard as I could. 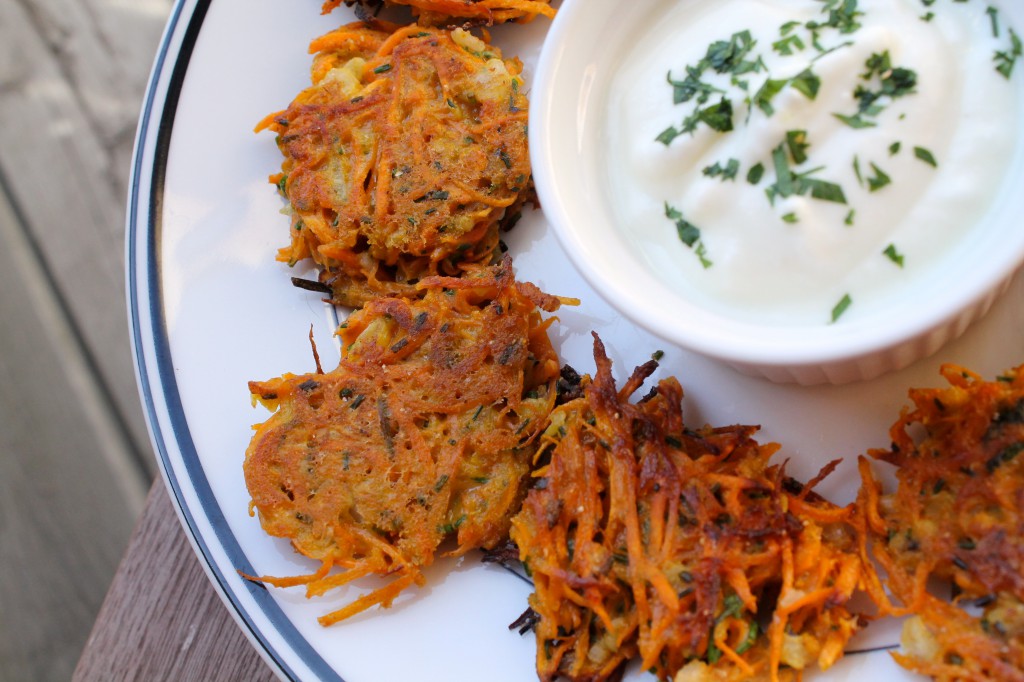 When I was done frying the latkes and was arranging them on the plate, they seemed to fit the cool autumn day so well.  Their bright orange hue matched the fall leaves drifting to the ground in our backyard as I scrambled to take pictures before as the sun began to sink below the old brick brownstones. Feeling like I got a few good shots, I couldn’t resist the “dunk” anymore. The tang of the yogurt is the perfect partner to the slight sweetness of the latkes – creamy and cool.

I am so excited to continue trying out more recipes from the Tiny Food Party like the Mochi Ice Cream Balls, Addictive Arepas, and the Cozy Eggnog Shooters to name a few…. It goes on sale October 9th so make sure to reserve your copy HERE now!

Note: Although the recipe in the book says it makes 30 latkes, I found it make about 15 when using about 2 Tablespoons of the mixture for each one. Also, use 3 T all purpose flour if you do not need the recipe to be gluten free.

Place shredded sweet potato between a towel, roll up, grasp ends, and twist to squeeze out all of excess moisture. (The more moisture you get out, the crispier they will be!) In a large mixing bowl, combine drained sweet potato, onion, garlic, and chives. Sprinkle flour over mixture and fold to combine. Stir in egg until fully incorporated. Season with salt and pepper. In a cast iron skilled, warm oil over medium high heat. Drop dollops of batter (about two tablespoons each) into skillet and cook about 4 minutes on each side or until golden brown. Remove from skillet and drain on paper towels. Repeat with remaining latkes, adding more oil if needed to pan, until finished. Serve with greek yogurt as the dipping sauce. Best served warm!

*I received this book from Quirk Books, the publisher of this fantastic cookbook but all opinions are my own. *

How to Make Sourdough Focaccia: a Step-by-Step Tutorial