Blog › Lifestyle › Welcome to the Family, Bleu! From Foster to Forever.

Welcome to the Family, Bleu! From Foster to Forever.

This post is sponsored by Fancy Feast, a partner of Heartbeet Kitchen. Grace and Bleu love their new, Purely Fancy Filets, which are grain-free and 100% fish or chicken. We filmed the video in my home to show you the three different ways you can feed them to your felines, whether it be for a snack or at mealtime.

When I started fostering kittens about a year ago, I knew it would be hard to let each of them go. The first set of brothers, I was a train wreck. They came to us at 5 weeks old after being abandoned at the shelter, and stayed with us until they were adopted together at four months. I also had a close bond with the sweetest tabby boy, Luke, who gave the best snuggles and even learned to play fetch.

Still though, throughout those heart breaks and every adoption, I was incredibly happy the cats had a loving, safe life ahead of them with wonderful families. And I also knew that keeping any of them meant I wouldn’t be able to foster as many in the future.

But then came Bleu.

I had agreed to help our another foster caregiver who was going to be out of town for the holidays. She said that Bleu required extra attention, as she’d had a rough beginning, and they still weren’t sure what was wrong with her. She’d had trouble gaining weight, her pupils were not the same size, and her gait was off. She didn’t run, or talk, or purr, like a normal kitten should. But she was so sweet, and hanging on. Bleu was with us for a few days and stopped eating and drinking. She seemed lethargic, and was down to 3 pounds 8 ounces, at 6 months old. I spoke to her caregiver over the phone, trying to figure out what to do. She mentioned that if she passed, to remember it wasn’t my fault. The vets couldn’t find anything, and had done a multitude of tests. A few days later, I brought her back in. I’ll never forget the look in her eyes and she laid in my arms, motionless. Something was hurting her.

They ended up finding small pieces of bone in her stomach from raw food she had been fed during the time they couldn’t get her to eat much of anything (when she was about 4 months old). It had seemed successful because she finally started to eat and gain weight, but her GI system may not have been developed enough to handle even the tiniest bones. She spent the night at the hospital, and with intravenous fluids, she was able to pass the bones.

Over the next month, she gained strength, weight, and life. Slowly she began to play and show her personality, which we fell in love with. So sweet and gentle, yet full of curiosity. Her hops turned into a run, and she tackled a glitter ball with fierce. One day I was in the kitchen, and heard a peep from below. She was at my feet, hungry, and letting me know. The first sound I had heard out of her, ever. At night she crawls in by Brian, and nestles into the crux of his arm. Grace accepted her as a friend, and although they don’t cuddle, they play SO hard. And I can see the age in Grace turning back a few years, with more energy and a happier soul.

I knew Bleu was meant to have come into our lives, and I couldn’t imagine adopting her out. Which is how she became our happy foster fail (an endearing term used in the rescue world).

We had so much fun making this video to show you a little of our days together.

Because we know her GI system is sensitive, high quality food is very important to me when feeding her. She eats Fancy Feast Purely Filets quite often because they are 100% fish or chicken, and super versatile. As you can see by the video, she absolutely loves them! Sometimes they’re flaked as a topper for her meal, other times we play a little game where she “dances” on her back feet to eat the filet. And when she has been playing hard with a glitter ball, I’ll flake a little into my hand for her to eat as a snack.

Now…. if only I had as much energy as her. ☺️ Welcome to the family, Bleu. We love you. 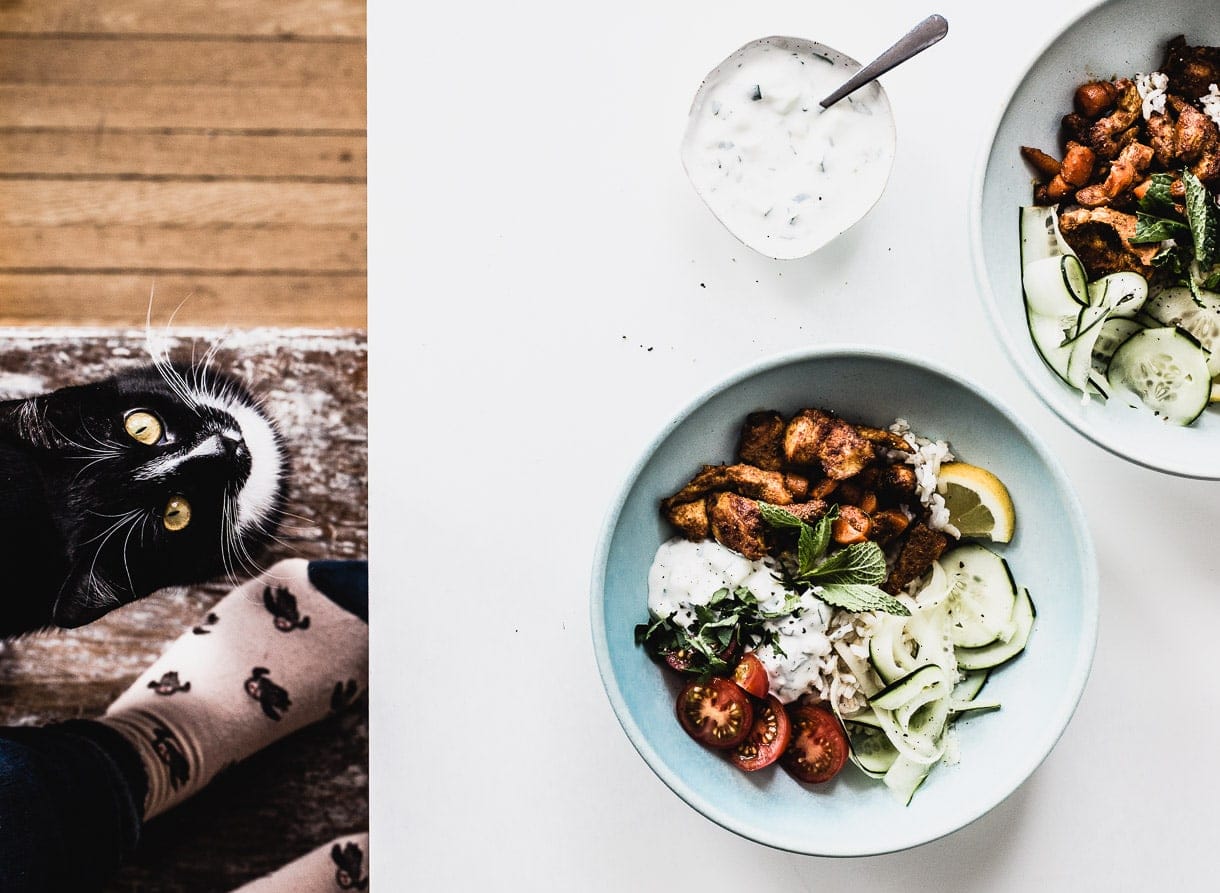