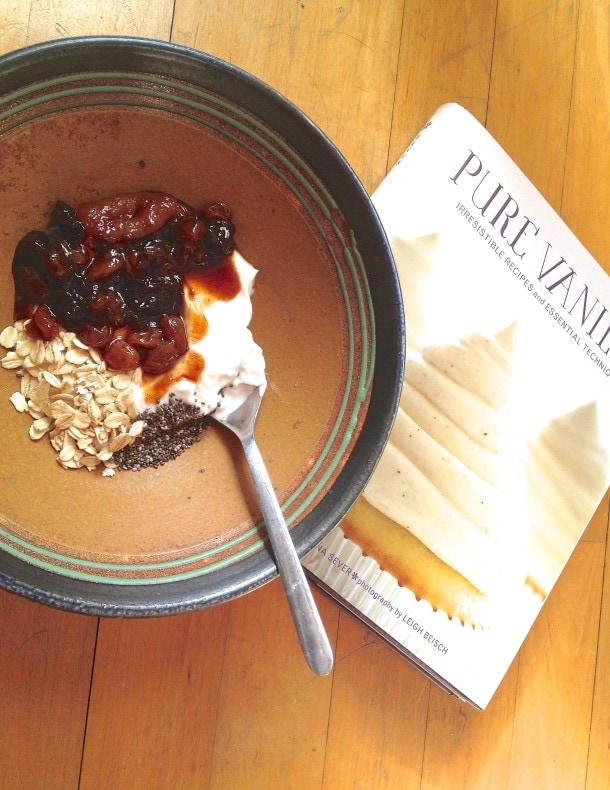 One of my favorite breakfasts in the summer is Greek yogurt or oatmeal topped with sun kissed, ripe berries of all kinds – so juicy that they seem to bleed onto the stark whiteness of the yogurt. Because the berry season is very short in Minnesota I consistently eat berries until I’m worried my teeth are going to acquire a pink hue. I just can’t seem to get enough of the freshness that screams “peak of the season!” Before I know it, fall has brought in cooler air and pumpkin themed breakfast options. Then suddenly the dreaded shorter days, chilly mornings, and snow, lots of it, creep in.

The beautiful hearty greens, tomatoes, and cucumbers that flood the farmer’s markets are gone and root vegetables take center stage instead. No supermarket fruits can even come close to the taste of those fresh berries in summer, which brings me to the reason for this recipe. I recently received a new cookbook “Pure Vanilla: Irresistible Recipes and Essential Techniques” written by Shauna Sever. I love how she describes the book ~ “For years, poor Vanilla has stood on the sidelines while her sexy sister Chocolate gets all the attention. But in Pure Vanilla, we follow her from her beginnings as a pod nestled in a tropical orchid, all the way to your kitchen, where she becomes the star in more than 85 recipes and clever culinary ideas, all celebrating the world’s most universally-loved flavor.” 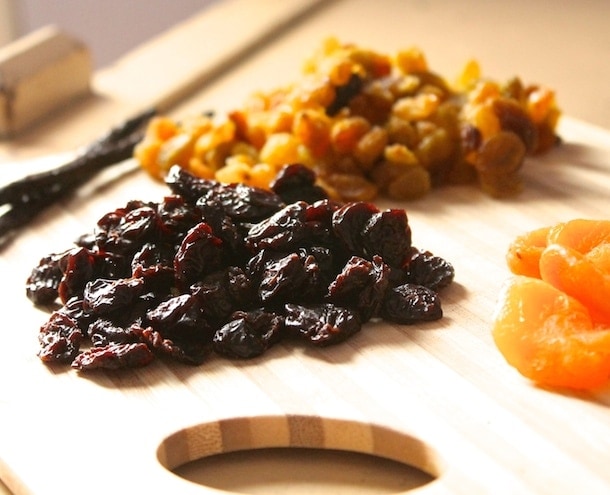 As the name suggests it’s all about vanilla: how to use it, its numerous forms, history, and of course, mouthwatering recipes. In this recipe from the book, dried fruit and real vanilla beans simmer together in a “broth” of orange and lemon juice, almost melting into this beautiful compote. Yes, vanilla beans are on the expensive side but the toasty, caramel flavor they give off is one that cannot be replicated by any other ingredient.

Can you see the lovely specks of vanilla smattered about? Gosh they remind me of the first time I saw the little black dots adorning my Ben and Jerry’s Vanilla Bean ice cream as a young girl. Greek yogurt topped with this dreamy compote is kind of like having an ice cream sundae for breakfast – a win in my books. I also think it would be fantastic atop steel cut oatmeal on a cold winter morning. I still can’t believe how rich and buttery the vanilla bean makes this taste, without adding any actual butter.

This cookbook would be a great gift for someone – one that’s just as educational as it is filled with beautiful photography and recipes. The only thing I disliked was that some of the recipes left out a few instructional or inaccurate details that I had to figure out on my own. For example, her directions read to cook the fruit on a simmer for about 20 minutes to get it to thicken and reduce. I found this step to take 40 minutes. I have the adaptation in the recipe below, along with less honey because dried fruit is so sweet anyways! Cooking is always an experiment though no matter if you’re following a recipe or not. All in all, I think you’ll enjoy this book!

Over medium heat, bring the water, honey, orange juice, and lemon juice to a boil. Add the fruit, cinnamon, and salt. Scrape the caviar out of the vanilla bean into the pot. Toss in vanilla bean as well. Simmer for 40 minutes, stirring occasionally until reduced and you have a thick mixture the consistency of chutney or compote. Be careful not to let the heat get too high so it does not burn. Remove vanilla beans. Serve warm or cold over yogurt, oatmeal, or even a grilled meat of choice. Will keep in refrigerator for 10 days.