4.75 from 8 votes
4 comments
This delicious vegetarian dip is made with cauliflower florets that are caramelized in a skillet, then mixed with your favorite buffalo wing ingredients like hot sauce, celery, green chiles and cheese! The entire recipe is made in one pan to make things easy and baked until bubbling hot. Serve this game day appetizer with tortilla chips or fresh veggies.
Jump to Recipe

There’s a crockpot buffalo chicken dip that makes an appearance at nearly every family gathering I’m at, originally inspired by buffalo wings. The recipe goes something like shredded chicken, cream cheese, sour cream, and hot sauce. It’s addicting, and I’m not mad about it.

But let’s take that buffalo dip into vegetarian territory with caramelized cauliflower, and get reeeeaallll cheesy. Extra hot sauce, diced celery and green chiles, plus big shreds of Tillamook Mexican 4- Cheese bubbling on top. Plus, the entire thing is made in ONE PAN.

It’s a game-day must, as we enter the season of weekend football, and I am so ready to cheer for my Minnesota Vikings despite living in the land of the Packers.

To add extra flavor to the cauliflower, you’ll sauté it until caramelization happens, adding depth and better texture to the overall dish.

Let’s be honest — the best part about wings is the SAUCE, so it’s really not a big deal to lose the chicken here. Cauliflower is a great stand-in, absorbing the sauce like a dream. So are potatoes, which is why we love these Loaded Buffalo Tots, too!

I like making and serving dips in a cast iron skillet when I’m entertaining because one less dish to clean, and the cheese gets perfectly crispy and bubbly. This skillet white chicken chili dip is my reader’s favorite! You can easily make everything ahead of time too, and then just pop it in the oven.

What’s the best buffalo sauce to use?

Although the brand of hot sauce you use is entirely up to you (Frank’s, Texas Pete, Tabasco, Cholula — the list goes on), Chololu has that classic Buffalo wing flavor, adding a peppery, vinegary tang and just the right amount of heat. It’s what I use in every buffalo sauce recipe, and it’s never let me down.

Is this buffalo cauliflower dip keto or low carb?

It is! Bonus points for the extra cheese. ☺

Can I use riced cauliflower?

I haven’t tried that yet, but I imagine it would work if you caramelized it as the cauliflower florets are in this recipe. If you make the recipe this way, let me know in the comments! 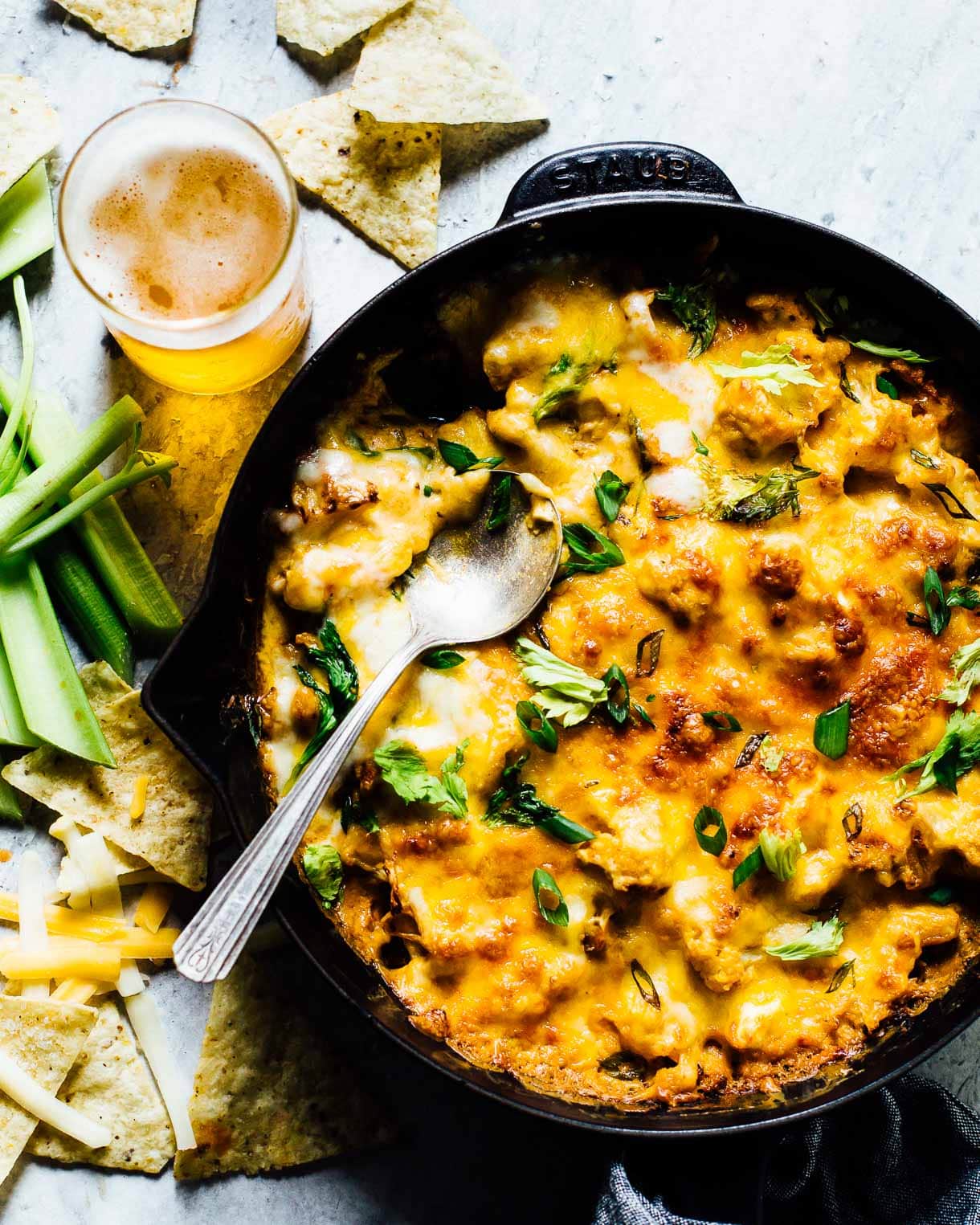 This delicious vegetarian dip is made with cauliflower florets that are caramelized in a skillet, then baked with your favorite buffalo wing ingredients like hot sauce, celery, green chiles and cheese! The entire recipe is made in one pan to make things extra easy.
4.75 from 8 votes
Print SaveSaved
Prep Time :15 minutes
Cook Time :25 minutes
Total Time :40 minutes
Yield: 8 servings
Author: Amanda Paa

You can easily make everything ahead of time and then just pop it in the oven when you’re ready.

The Only Pimento Cheese Recipe You’ll Ever Need