5 from 2 votes
4 comments
Jump to Recipe

These gluten-free vanilla cupcakes are incredibly moist and fluffy inside, made with olive oil instead of butter. They’re decorated with a stunning pink ombre frosting, using a 1M Star Tip. This is a small batch recipe, making 8 cupcakes, but can easily be doubled.

The one that signals Valentine’s Day, heart shaped everything, red and pink having their moments, and countless reasons to be a cheesy romantic. And whether it’s with your boo, your BFF, or your best gal pals, these gluten free cupcakes with pink ombre buttercream are worth celebrating.

Over the almost 9 years I’ve been blogging, I’ve posted many desserts. My sweet tooth – she’s no secret. And can be seen in my Best Gluten-Free Chocolate Chip Cookies and Cardamom Pumpkin Cheesecake, to a No-Bake Vegan Peanut Butter Cup Tart. But I have yet to share a cupcake recipe!

So during the month of January, I tested and tested different versions until the gluten free vanilla cupcakes coming out of my oven were fluffy, light, and incredibly easy to make. Yes, even that starry frosting – I swear it’s easy to do, and looks much more intimidating than it actually is. More on that later in the post.

Here’s a little insight to my recipe testing, and key components of an amazing gluten free vanilla cupcake.

How to make professional looking cupcakes when you’re not a baker:

Now, let’s talk about this mauve inspired, pink ombre frosting situation. I spent an afternoon with my friend Holly, making these cupcakes, after I had sent her a few inspo photos of cupcakes decorated using a star technique.

I decided to learn how to pipe the frosting, and gave her the green light on mixing up the prettiest 3 shades of pink.

I made a double batch of this simple buttercream frosting recipe, and split it into three different bowls. Holly made the three shades of rose pink by adding red food coloring, followed by a few drops of blue. With each bowl she increased the amount of red to create a deeper shade.

Then, for the piping technique, I recommend watching this Youtube video to see how to use the 1M Open Star tip. ou’ll see it at the 1:25 second mark. That’s all I did to learn! Once you’ve filled your piping bags, practice on a plate to get the hang of how much pressure you need to use, an how fast/slow to pull the tip up.

You certainly don’t have to do three different colors of frosting. Decorating with one color, using the star tip would also be very pretty! 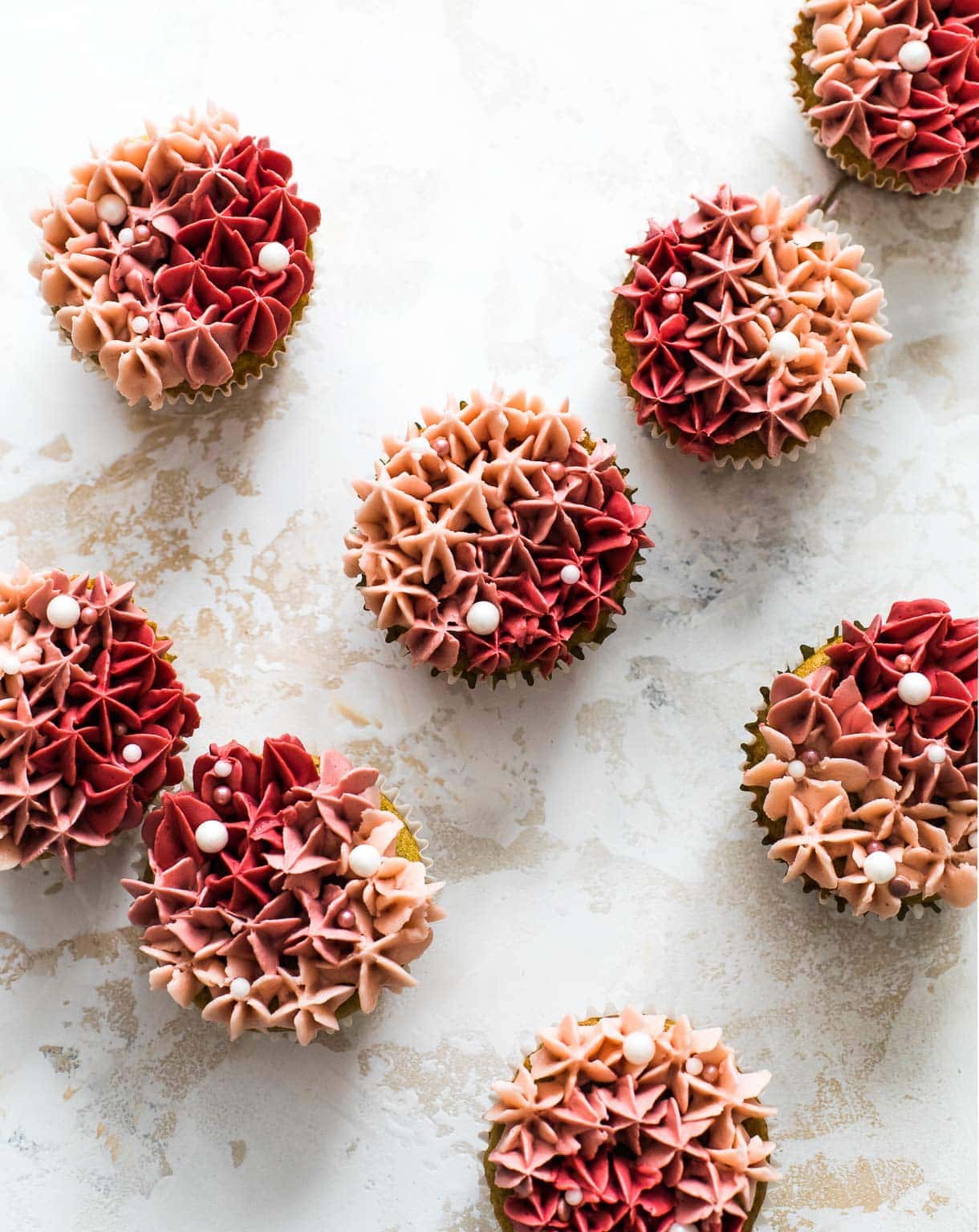